HugeServer Knowledgebase > Linux > CentOS > How to install and use vnStat and vnStati on CentOS, Debian and Ubuntu

How to install and use vnStat and vnStati on CentOS, Debian and Ubuntu

vnStat is a command line network bandwidth monitoring utility which counts bandwidth (transmit and received) on network devices and keeps the data in its own database. One of the interesting things about vnStat is persisting the monitoring through reboots. vnStat is able to monitor multiple interfaces at the same time and get you several output methods.

We are assuming that you have root permission, otherwise, you may start commands with “sudo”.

For installing vnStat on CentOS you have to add “epel” repository first:

Then you can install vnStat via “yum”

For Ubuntu and Debian:

run the following command to force vnStat to create a database for your network interface:

To see all network  interfaces available in your system, use the following command:

If you want to start the vnStat as a daemon service, execute:

The most basic usage of vnStat is to simply run: 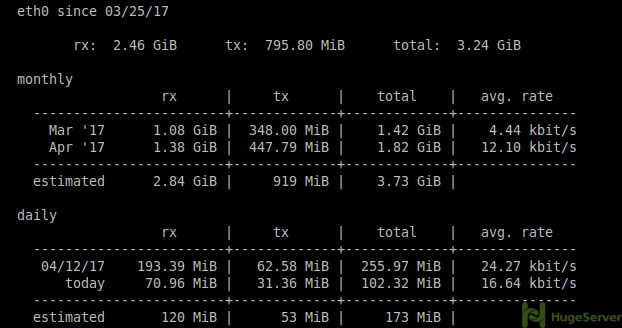 This gives a month wise summary of total network traffic from all active interfaces.

If you want to see this information for a specific interface you can use “-i” flag.

We also can view hourly information in the form of a console-based graph for the last 24 hours:

Using “-m” flag will show you the monthly statics:

vnStati is used to produce graphical output for vnStat results, it creates images that representing the network traffic as graphs. it takes the required information to create graphs from vnStat and stores it in the specified location.

To take the output of a specific interface, we can use the “-s” flag. we will also be using “-o” flag to specify where the output file will be stored. (we name our output file eth0.png you may want to change it to anything you want):

We can use the “-h” flag to get the hourly output from vnStati, it’s just like vnStat:

An example of the graphical output:

It is possible to get the total information by combining the traffic of multiple interfaces. for example, we can get both eth1 and eth0 records in a single file so we can compare them, you can do this with the command below:

Check out Vnstat on its official Github for more information!

Was this tutorial helpful?

One thought on “How to install and use vnStat and vnStati on CentOS, Debian and Ubuntu”